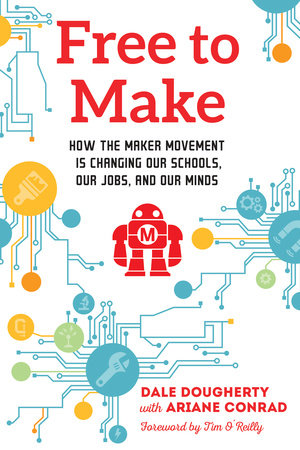 A must-read for any maker or anyone interested in becoming one. Said most simply, we think with our hands as well as our heads—something we have forgotten in most of our current schooling. Free to Make provides a way to reach the many of us that find learning by sitting in a school room so boring. A sense of agency is the key to learning, and making things is a route to agency.

Trauma and the 12 Steps, Revised and Expanded. Jamie Marich. How to Be More Tree. New York Times. Retrieved November 2, Categories : Living people births O'Reilly Media. Namespaces Article Talk. Views Read Edit View history. Rating details. More filters. Sort order. Fantastic book. Very inspiring. This is going on my unschooling shelf! Of the popular books I have read on making for my dissertation, I like this one the best, although it is not perfect by any means.

First and foremost, I appreciate the style in which it is written, much less breathlessly boosterist and technologically determinist. Dougherty makes it clear that the practice, tools, and locations of making are thoroughly grounded in people, societies, and cultures.

Unlike these other writers, he uses many more good qualifiers like "potential", "could", "has the capacity to" and so on. I think Dougherty has done well to write this book in collaboration with Ariane Conrad, a self-described "book doula", and I am sure she did much in helping Dougherty avoid certain technological determinist language and pitfalls and reduced the number of "excited claims" a great coinage in an academic literature review of the making movement by Sabine Hielscher and Adrian Smith available online through SPRU.

I also suspect strongly that in waiting until to publish, Dougherty has avoided the initial wave of heavy hype regarding making. However, most of my quibbles with the book are just that, quibbles. If I have one key problem that I would like to put out with the book, it is this. Dougherty, like Anderson and Hatch, begins his argument with the claim that "we are all Makers".

First of all, I am not so sure that is quite as true as proponents would like to think, at least not in the way it's presented.

The problem is that Dougherty, like others, never really is able to "bridge" between broader forms of making and the specific kind of high-technology inflected making that is celebrated in the pages of the magazine that he founded: MAKE. He claims, for instance, that cooking is making, and yet this kind of "lo-fi DIY" to use the term coined by Amy Spencer and the title of her book on the topic is not so well integrated with the kind of work done in Makerspaces. What of, for instance, the vast legions of home hobbyist woodworkers, overwhelmingly, it seems, consisting of middle aged white fathers of which I am one.

There seems to be little crossover between those hobbyists and makerspaces, and much the same for knitters, canners, and so on, either in reality or in both popular and academic literature. There is in fact a vast gulf between various forms of DIY and craft engagement and what goes on in Making which nearly always involves a high tech component even if often embedded in an otherwise less high tech craft, such as adding LEDs to clothing.

Truth is, this is a very hard gap to bridge and I am not contemptuous of his claim that somehow, in some way, all forms of craft and making are connected.

But it is not enough to assert this position. Don't let that one big issue faze you, however. This is a much needed and highly readable book, and highly recommended.

Oct 27, Christopher rated it really liked it. This attitude is perhaps why there has always been such a contempt for designers amongst engineers. Interesting overview of where the Maker Movement currently is and where it has come from.